Do you have a PCI slot instead of a PCIe? and wondering, can I use a PCIe card in a PCI slot? PCI (Peripheral Component Interconnect) are sockets on the motherboard that attach add-on controller cards, graphics cards, and other related devices. These PCI slots were discovered in the early 1990s and are still in use.

Can I use a PCIe Card in a PCI Slot?

These adapters are available in the market, and you can use them to connect a PCIe card to a PCI slot. But again, there will be a performance drop as the conversion from PCIe to PCI is not that efficient.

The PCIe to PCI converters allow you to multiply the one PCIe card to multiple PCI sockets. PCIe x1 to 4 PCI slot converters are available in the market, connecting up to 4 PCI devices from a single PCIe card. But all these cards will work at PCI speed only. 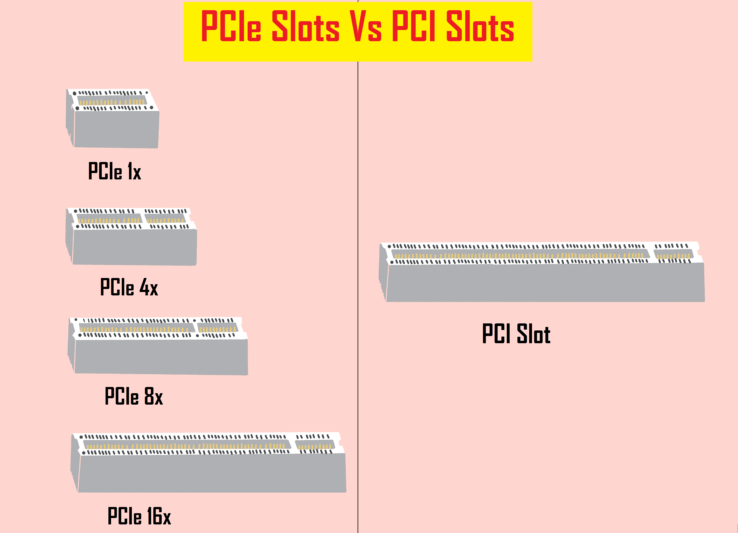 What Are PCIe Slots and How Can I Use Them?

PCIe slots are expansion slots found on many computer motherboards that allow you to add additional hardware devices to your systems, such as graphics cards or sound cards. They come in various sizes, with the most common being 16x and 8x. Some newer motherboards also have 4x and 2x slots.

The number after the ‘x’ denotes the bandwidth that the slot supports. So a 16x PCIe slot can offer up to 16 times the bandwidth of a 1x PCIe slot. The higher the number, the faster the connection. If you want to add a graphics card to your system, you need a PCIe x16 slot. For sound cards, you can use any size PCIe slot.

You can also get PCIe expansion cards that add additional ports to your system, such as USB 3.0 or eSATA. These are usually 4x or 8x cards. In addition, some motherboards have multiple PCIe slots of different sizes. It allows you to mix and match devices to create the perfect setup for your needs.

How To Install PCIe Adapter on PCI Slot

Installing a device in a PCIe slot is easy. It is simple, just like plug-and-play devices. Just line up the card with the slot and push it firmly into place until it clicks. You may have to release a retaining clip on the back of the card to insert it. But don’t forget to turn off your PC in this process.

Now that you know what PCIe slots are and how to use them, you can start expanding your system and adding new hardware devices. Just be sure to check whether they are compatible or not. 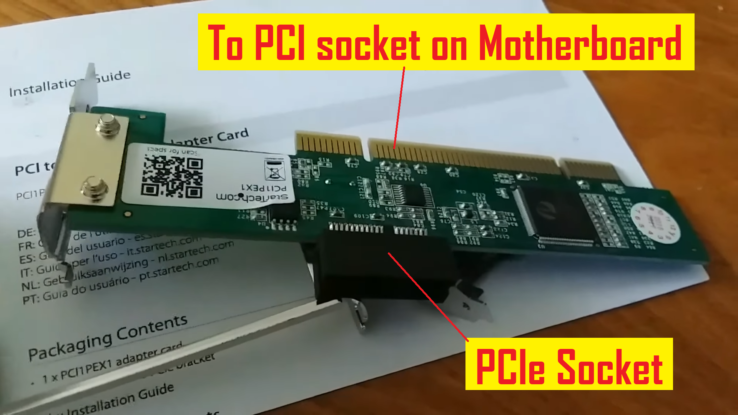 How to Distinguish PCIe Vs PCI?

PCI Express (PCIe) is the newer standard and is currently the most common type of expansion slot used in computers. It offers higher bandwidth than PCI and is also faster. Some newer motherboards also have 4x and 2x slots.

Here is how different bandwidths are with respect to the PCIe slots:

PCIe slots can be used for various devices, including graphics cards, sound cards, and RAID controllers. It can also be used for USB 3.0 and eSATA expansion cards.

Is PCIe Better Than PCI?

If you require more bandwidth than what PCI can provide, PCIe will be a better choice. However, PCI can be compatible with a wider range of devices. So it comes down to what you need from your expansion card. But PCI doesn’t provide a fast response as compared to PCIe.

If you buy a motherboard, then look for the motherboard having both PCI and PCIe slots. It will allow your computer to support all sorts of PCI devices.

Can an External PCIe to PCI Adapter Work?

Similarly, if you use an external USB 3.0 or eSATA card, it will only work at the slower USB 2.0 or SATA speeds. So while an adapter can work, it is not recommended as it will significantly impact the performance of any devices connected to it.

Do all Motherboards have a PCIe Slot?

No, not all motherboards have a PCIe slot. Some older motherboards only have PCI slots. If you want to add a PCIe device to one of these boards, you must use a PCI to PCIe adapter. These adapters are available for both graphics cards and expansion cards.

New motherboards typically have both PCI and PCIe slots. However, some older motherboards only have PCI slots. Therefore, if you want to add a PCIe device to one of these boards, you must use a PCI to PCIe adapter.

Do all Graphics Cards Fit in all PCIe Slots?

No, not all graphics cards will fit in all PCIe slots. Graphics cards come in various sizes, with the most common being 16x and 8x. In addition, some motherboards have multiple PCIe slots of different sizes. It allows you to mix and match devices to create the perfect system for your needs.

Pros and Cones of PCIe and PCI

Both PCIe and PCI have advantages and disadvantages. The latest PCIe is considered better than the old PCI socket as it supports new devices with more power. Here are some of the pros and cons of PCIe and PCI sockets.

Pros and Cons of PCIe:

PCIe is the latest peripheral device socket. It has more pros than cons as compared to the old PCI sockets.

Pros and cons of PCI socket:

PCI is an old socket type, it has more cons than the PCIe. As it supports limited peripheral devices and has limited performance.

PCIe is the newer standard for expansion slots and offers higher bandwidth than PCI. It is also faster and available in a variety of sizes. All motherboards do not have a PCIe slot, with some older boards only having PCI slots. An external PCIe to PCI adapter can work, but all devices connected to the adapter will only work at PCI speeds.

So while an adapter can work, it is not recommended as it will significantly impact the performance of any devices connected to it.