The basic input/output system, or BIOS, manages the flow of information between the various components of your computer. The BIOS is a program that is saved on a chip that is located on the motherboard of your computer. This program gives instructions to the computer on how to start up and what peripherals are connected.

GPU also has its own copy of BIOS, which directs how the GPU communicates with the computer. When you update your BIOS, you are installing a newer version of the BIOS in place of the one that was previously installed. The procedure is uncomplicated enough that even a child might carry it out.

Why Computer Freezes During BIOS Update?

There are a few potential reasons your computer might freeze during a BIOS update. One possibility is that the BIOS update itself is corrupt or incomplete. Another possibility is the problem with how the update is being written to the BIOS. Finally, it’s also possible that there’s a hardware issue.

Here are some possibilities why your computer is freezing during BIOS update:

If you have a corrupted, faulty BIOS that you are trying to install on our computer may result in computer freezing. It may lead to motherboard brick. We often download BIOS from unofficial websites and try to update it. This BIOS may contain miscellaneous elements that may affect your computer. 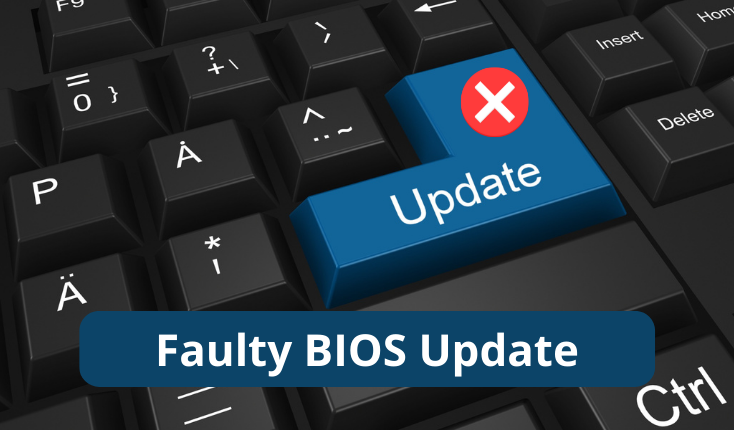 The computer always rejects the corrupted or faulty BIOS update as it won’t be able to run properly. It may also cause communication lag between the components. Artificial computer intelligence is incredibly sophisticated and will never use a flawed program.

The procedure of installing a BIOS is complex and tricky. First, you should know that there are several BIOS updating methods available. A bootable USB drive or CD/DVD is the most popular option. A sudden power outage can cause the BIOS update to fail and the computer to freeze.

If you attempt to update the BIOS without following the correct procedure, your motherboard may crash, and your computer may become unresponsive. It is because each motherboard’s BIOS update method is completely different. The wrong method for updating the BIOS can brick your motherboard.

Hardware Is Not Compatible

It’s possible that the computer’s hardware isn’t compatible with each other. It could be one of the reasons why the BIOS update causes the computer system to freeze. A mismatch in the hardware’s compatibility can cause various problems, including a freeze during the process of updating the BIOS.

Before updating the BIOS, it is essential to check whether all the hardware components are compatible. If you are unsure about compatibility, you must search the internet or contact the manufacturers. It will save your component from a big loss.

Before you attempt to update the BIOS, you must ensure that it is first configured to its factory settings. Then, you can search the internet for the correct settings or get in touch with the manufacturer if you are confused about the settings. It will prevent you from suffering a significant loss.

A number of factors can cause difficulty in successfully updating the BIOS, but one of the most common is a faulty hard drive. Over time, hard drives are susceptible to developing bad sectors, which can result in the loss of data as well as the freezing of the computer.

Before attempting to update the BIOS once more, you are required to install a brand new hard drive in your computer if the existing one has a problem and is faulty. Of course, if you use SSD for storage, you must change it too.

How Long Does A BIOS Update Take? Can It Take Hours? 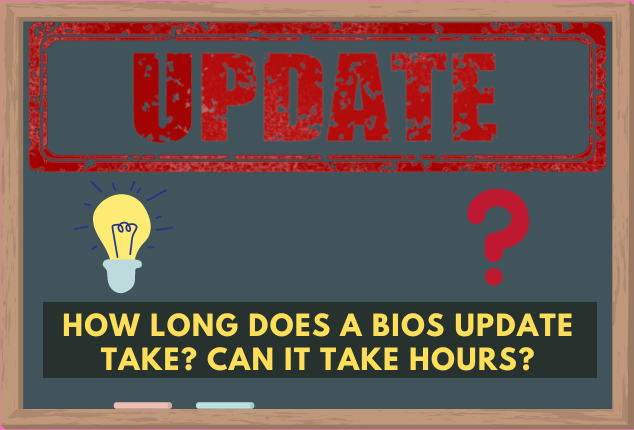 The normal amount of time for a BIOS is approximately 5 minutes. However, depending on the circumstances, it can take 60 to 90 minutes. Everything is dependent on the speed of the hardware you have. If we talk about the overall process from downloading compatible BIOS to installing it, it may take an hour.

You should not update your BIOS unless it is completely necessary. In most cases, the computer’s BIOS is up-to-date and does not require updating. Therefore, unless you troubleshoot a serious issue, you should not make any changes to the BIOS.

Updating your BIOS can be a risky proposition. If the update fails, your computer may become unusable. Having a backup of your BIOS before updating it is a must. Then, in the event of a problem, you can simply restore the backup and continue working.

What Happens If You Cancel Bios Update?

BIOS is not installed on hard drives or any other storage device. Both motherboard and GPU have a chipset where you install the BIOS. You can’t cancel the BIOS update before it is completed successfully. If you do, the result may be the bricking of your motherboard, which is permanent in most cases.

It is better not to interrupt the BIOS update process once it has started. You could lose your motherboard if the installation process is interrupted for any reason, such as a power outage or a sudden shutdown. The installation of the BIOS is a crucial process that must be carried out with extreme care.

That is why it is necessary to look for the BIOS backup for your computer. Each computer has its own BIOS recovery methods that you can get from the manufacturer’s manual.

If you don’t have the BIOS backup and the process is interrupted, the only thing you can do is send your motherboard to the manufacturer for a replacement. In some cases, the motherboard may be replaceable by the user, but that would require some advanced skills.

Can Updating BIOS cause problems?

No doubt, any BIOS change, whether an update or a rollback, has the risk of causing problems. Because of this, creating a backup of the file is essential before making any modifications to it. Using this method, you can rollback to a previous version if anything goes wrong.

After updating the BIOS, booting problems are among the most typical problems that may occur. If the BIOS update does not complete successfully and you cannot boot into Windows, you will either need to use a recovery disc or reinstall Windows to get things back on track.

This is another thing that may affect the overall update while installing. It can happen if there’s a power outage or accidentally turning off your computer while the update is still in progress. If this happens, it’s possible that you’ll need to replace your motherboard.

Fixing Bios Freezes On Your Computer

You can take these few steps to resolve the issue if the BIOS update causes your computer to freeze while it is being performed. Check the following solutions:

Configure Your BIOS to Factory Settings 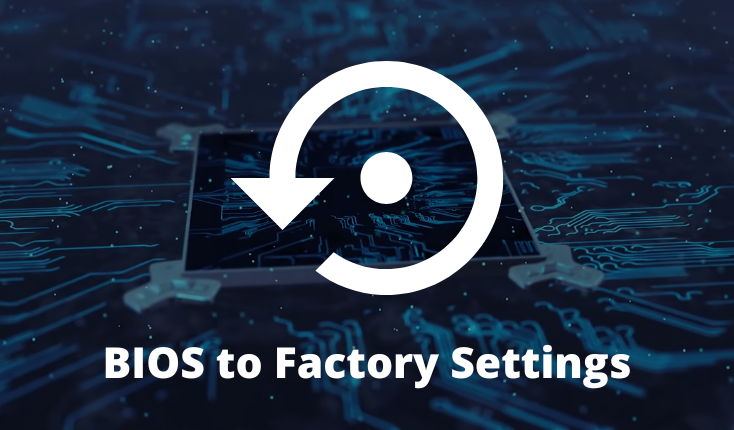 If trying to fix the issue by updating your BIOS does not work, you should try resetting your BIOS to the settings it had when it was manufactured. All BIOS settings will be returned to their original, factory-default states when you do this. We often change the BIOS settings that are not suitable for our computer.

You can determine whether or not the components are compatible by contacting the customer service of your motherboard or by visiting the manufacturer’s website. BIOS and hardware compatibility are specific to each motherboard since each has a different BIOS. So, always check before you start updating. 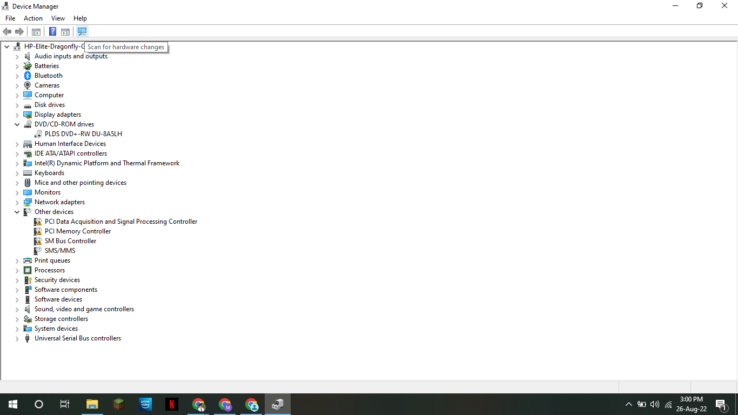 If you are using old drivers, you may experience computer freezing during BIOS updates. It is because most hardware components like CPU and GPU take part in the update process. Thus they require up-to-date drivers to perform functions correctly. That’s why you always check for updates before you start BIOS updating. 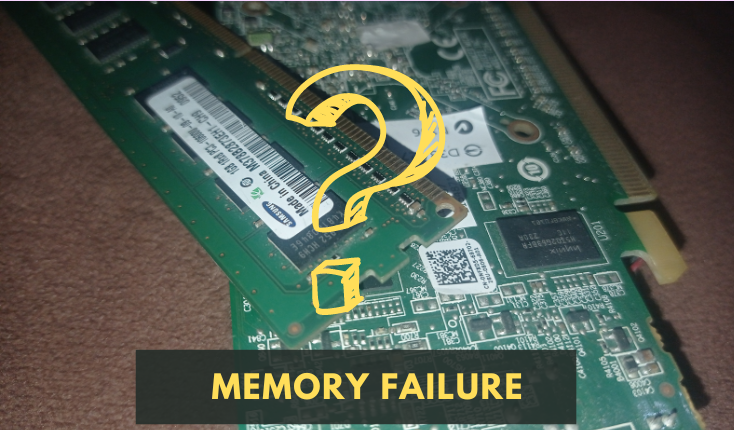 There is only one solution which is for RAM. You can change the RAM, which is not the permanent part of your computer system. But you can’t change the ROM as it is the part of your motherboard and solder there permanently. So, if you are facing a severe computer freeze, try to test your memories and replace RAM.

Your computer may be freezing due to a few potential reasons during the update. These may be corrupt BIOS, hardware issues, or outdated drivers. In this article, we have concluded all the possible solutions for you. Try all of them one by one and see which one will work for you. And always remember to take a backup before you perform any BIOS change. It will help you to recover if anything goes wrong.