When playing games with high graphics quality, the PC temperature increases significantly. It is because your CPU and GPU have to work constantly. In this article, we will find out how better cooling increases FPS & improve the performance of your computer.

FPS is Frames Per Second, and each frame stores an image with all the details. These images played at high speed give us an effect of video. More frames running per second give you a smoother video effect, while fewer frames lead to lags. The FPS is a significant feature in gaming.

A better cooling system keeps your computer cool; as a result, the resistances inside electronic components become very low. It increases the current flow in the hardware, such as GPU, CPU, RAMs, etc., which increases the FPS and Performance of your computer.

It’s a widely accepted belief that better cooling will increase FPS and improve performance. It is due to the fact that when components are cooler, they can run faster and more efficiently. Most experts agree that cooling has a very positive effect on FPS and performance.

There are a few ways to improve the cooling of your computer significantly. One is to add more fans to your PC. It will help move the hot air out of the case and keep cool air flowing in. Another way to improve cooling is to use a liquid cooling system. It can be either a closed-loop or an open-loop system.

No matter what method you use to improve the cooling in your computer, you will likely see an increase in FPS and performance. So if you are looking for ways to improve your gaming experience, better cooling is a great place to start. 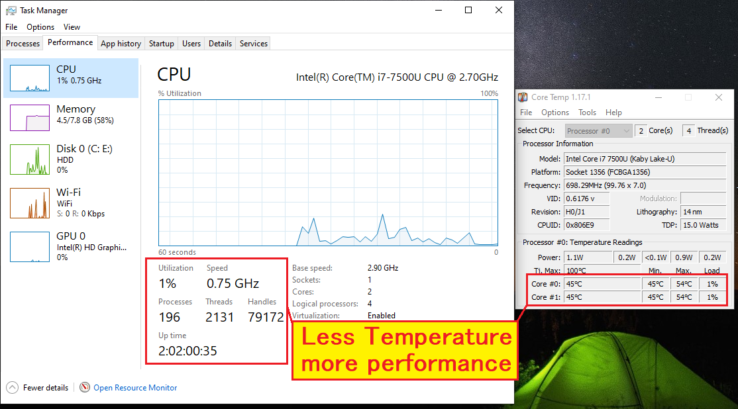 GPU and CPU require cooling to perform at their best. Overclocking is done to improve the performance and FPS in games. It’s a heat-producing process that requires a better cooling system. Cooling helps your PC reduce overheating, which leads to improved performance and more FPS.

We often hear the term FPS, especially when talking about games. FPS is an abbreviation of “Frames Per Second.” If your computer can display more frames within one second, then it is performing better. On the other hand, a computer with less FPS needs upgrades.

Each high-quality game has an option in its menu for increasing or decreasing the FPS. It is something that has a link to your GPU and Video RAMs. VRAM helps store image data while GPU processes it to make it look like a video. That is why computer games are called Video Games.

It is very obvious that a better cooling system increases the performance of your computer and increases the FPS. More FPS means that you are closer to victory, especially when competing in online games. Gamers install extra cooling kits and high-speed fans for winning.

More than 80% of your computer’s performance depends on your processor. The processor is one of the most heat-producing components in your PC, and it requires proper cooling to perform at its best. No doubt, cooling is directly proportional to your PC’s performance. More cooling means better performance.

If a computer system accurately completes some work for itself or us, we call it performance. Technical terms that include performance are efficiency and throughput. Simply, computers that can complete more tasks have high-performance levels.

It is a fact that better cooling increases the performance because there is less heat inside electronic components. Less heat in these components means less resistance that causes more current flow. This is how you get a smooth-performing computer system.

More fans indirectly affect the FPS by providing cooling to your CPU and GPU. It can help improve airflow within your case, which may help to improve overall performance, including FPS. Adding extra fans makes a big difference in temperatures and allows your components to run cooler and faster.

If you ever see a fancy computer case, you will notice that it will have more or less three fans in front. And it will have at least two fans in the back for throwing the hot air out to keep your computer cool.

No doubt, the high temperature of your CPU or GPU decreases the overall performance leading to an FPS drop. In addition, as the temperature rises, the probability of Frame Rate becoming unstable also increases. Therefore, it is important to watch the temperature while gaming or performing other high-end tasks.

You can use applications like CoreTemp, HWMonitor, Macs Fan Control, etc to monitor. These applications also offer the overlay during the gameplay so you can monitor the temperature and other performance features.

Of course, other factors affect FPS, such as game settings, driver optimizations, etc. But in general, the temperature is one of the key factors.

All electronic components, including CPU and GPU, generate heat when working. This heat is generated as the current flows through these components that operate on electricity. Therefore, more operations mean more current flow, leading to an increase in temperature.

What Temperature Should a Gaming PC Run At?

Unfortunately, more temperature affects the performance and FPS of a computer, but it can also burn out the hardware. If you’re looking to get the most out of your gaming PC, make sure it’s running at 140 to 165 degrees Fahrenheit (60 to 74 degrees Celsius).

Simple and Easy Ways to Cool Down a Computer

If you are finding a way to reduce the heat of your computer and cool down all its components, then you can use the following techniques.

There is hardly a computer that does not have fans installed on it. These fans start as the computer starts and switch off only when the computer is completely off. The only purpose of these fans is to throw out the hot air accumulating inside your PC or laptop.

You must have seen holes in the front and behind your PC. These holes are also present beneath the laptop computers. The purpose of these holes is to create an air vacuum from one side and throw it out the other side. This technique is used for cooling down your computer system.

If these holes are properly opened, and there is no obstruction in the airflow, then your computer’s ventilation system is way better than the others. But if there is a wall in front or behind your pc or a sticker on these holes in your laptop, It will restrict airflow.

Some people think that opening their computer case will cool it down quickly. But actually, a closed case cools down the computer faster. It is because the shape of our computer cases are built to throw air outside when they are close and have proper ventilation channels.

The metallic case not only directs the airflow from inlet holes to outlets but also works as a heatsink. This is because metals are better conductors of heat. Hence the heat inside your computer dissipates in such cases. Fancy glass casings are recommended only for air-conditioned rooms.

Cleaning your computer from time to time keeps the fans and ventilation pathways open. The dust particles form a layer on components and the heatsinks. This layer does not let the heat dissipate properly from the system leading to high temperature inside your computer and reducing the FPS and performance.

If you are a gamer and do extreme gaming, you should consider installing a water cooling kit. This kit will drop your computer temperature significantly because water conducts the heat about 30 times faster than the air. These kits contain heatsinks, cooling water, and fans, which are an all-in-one system.

The latest water cooling systems have transparent parts that look cool when the room is darker, and the RGB lights are on. In addition, some cooling kits have a bright and eye-catching colored liquid that attracts the people who visit your room for the first time.

The optimal temperature of a gaming PC ranges from 140 to 165 degrees Fahrenheit (60 to 74 degrees Celsius). Unfortunately, more temperature affects the performance and FPS of a computer, but it can also burn out the hardware. There are different methods of cooling down a computer to increase its performance: using faster and more fans, better ventilation paths, a closed computer case, cleaning your computer, or installing a water cooling system.