Different companies like Intel and AMD are making CPUs with various performance criteria. As a result, each brand may divide these CPUs into different series. Furthermore, these series are usually divided into different models. The performance of each model is usually determined by its clock speed, the number of cores, cache size, and memory bandwidth.

Many direct and indirect issues lead to this problem. Here will discuss why your CPU is performing below expectations and how you can improve its performance. So without any delay, let’s start the topic.

Why Is My CPU Performing Below Expectations?

But your CPU is not the culprit every time. Sometimes, your motherboard does not match your CPU, and your CPU performs below expectations. In this case, you should do web research to find out the best motherboard for your CPU. It will solve your issue of underperforming CPU.

When upgrading a motherboard and a CPU, never forget to upgrade your RAM. It is because the latest CPUs have multiple cores, and they can process thousands of instructions quickly. For this, they need more RAM as system memory not only stores the program instructions and their processed results.

All the CPUs are manufactured in a very controlled and clean environment, and the quality of each CPU is tested multiple times before bringing it to the market. It can happen that the CPU is untested accidently and is packed. But in very rear cases.

It is also possible that a CPU has lost its quality due to overuse and overheating. In all cases, your CPU will underperform below your expectations. There is only one solution to this problem that I will recommend to you: to replace or upgrade your CPU with a new or latest one.

High CPU Usage Even When Idle

Your CPU usage might be high when your operating system is updating inn the background. The same happens when your antivirus scans your storage drives for detecting and deleting viruses. It mostly happens when high-end games, rendering, or editing software are running. 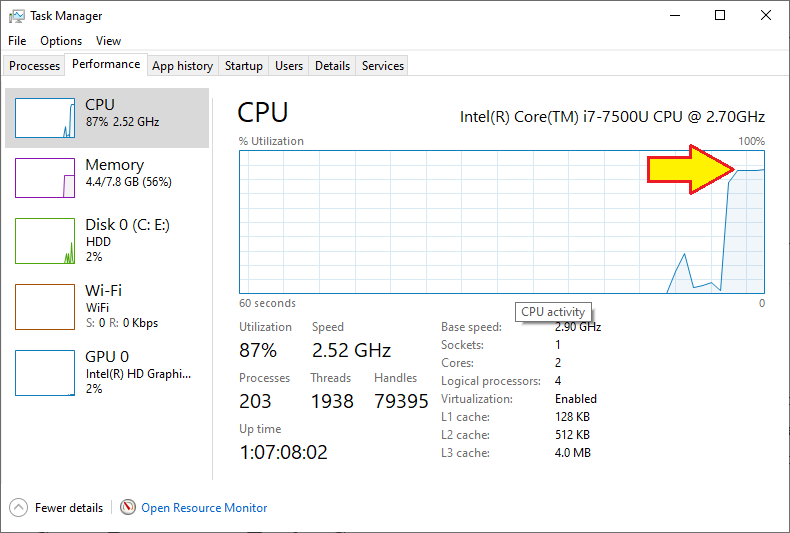 But if nothing is happening, no apps are running, no video is playing, and the CPU usage is still high, then it is a sign that your CPU is performing below expectations. A CPU can’t be idle because the operating system starts its tasks when you leave your PC as it is. You can easily check the CPU usage as mentioned in the heading above.

All the modern CPUs have multiple cores inside. A core is a small CPU capable of performing all the arithmetic and logical functions when software or app runs. Multi-core CPUs work even when one or more cores burn out. But in this case, they start performing below expectations.

Overused CPUs have faulty cores because such CPUs have been used for high-end gaming, rendering, and video editing tasks. As a result, the cores of such CPUs don’t work properly, and your computer or laptop starts to become slow. In other words, your CPU starts performing below expectations.

Overheating – Fan Not Working – Low or no Thermal-paste

If your CPU is overheating, then it will perform below your expectations. It is possible that it may burn out due to overheating one day. The first reason behind an overheating CPU is a poor ventilation system. Most of the time, there are walls or other stuff around a computer system casing.

As a result, the computer can’t breathe properly to exhale the hot air out in air and inhale the normal air to cool down the CPU and other hardware. Laptops placed on a thick warm cloth during use also have an overheating CPU. In the first case, you need to place your PC where it can exchange air.

And in the second case, you should place your laptop on a flat surface where its breathing holes are not obstructed. You will see a noticeable change in the performance of your CPU. The second reason for overheating is that one or more fans are not working. You can open the casing of your PC to test that. 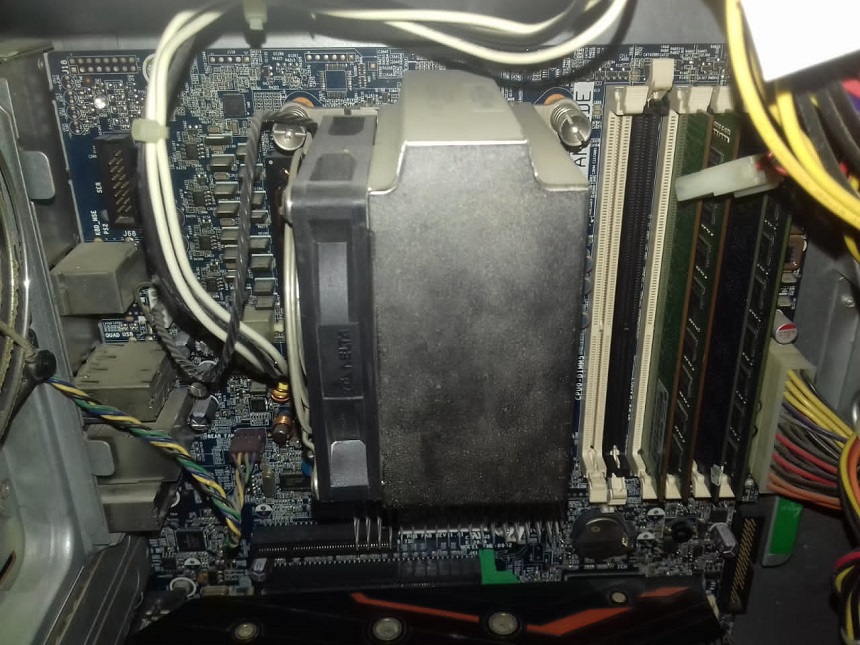 If one of the fans is out of order, replace it with the new and faster one because fans dissipate the heat inside the casing of your PC. The hardware becomes overheated if the heat stuck inside. And the first hardware that burns out is your CPU because it is already working at high temperatures.

Expired thermal paste can be another reason behind the overheating CPU. Central processing units have a heat sink with a fan fastened on it. There is a layer of thermal paste where the CPU’s body is in contact with the heatsink. The paste transfers the heat of the CPU to the heatsink.

The expired thermal conductive paste does not work properly, and it cannot transfer the heat from the CPU to the heatsink to dissipate in the air. As a result, the CPU becomes hotter and hotter, at last losing all of its performance. This is why it performs below your expectations.

Suppose you are a high-end user who uses a computer or laptop for extreme gaming, 3D rendering, and video exporting. In that case, I recommend changing your thermal paste after one and a half years. I will also recommend installing a liquid cooling kit to keep your hardware temperatures as low as possible.

CPU is the main component of your computer system and also known as the brain of computer. All the brains work properly when they are not overloaded with a burden. Similarly, when unnecessary background apps are running, the CPU switches between them from time to time. As a result, it keeps the CPU busy and performs below expectations. 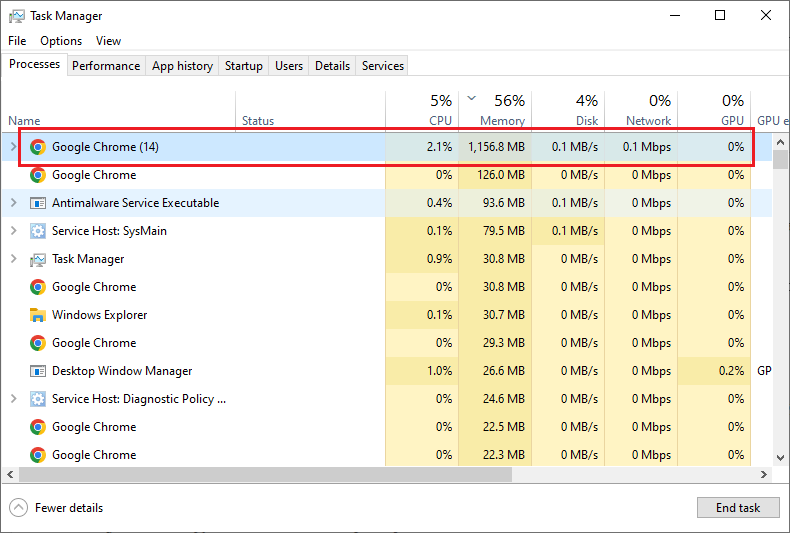 I recommend you disable the unnecessary apps that start with your computer’s startup. Because these apps will also make your operating system load slowly; on the other hand, they take care of all the background apps executing for no certain purpose. Close them all to increase the performance.

Undoubtedly the battering saving mode saves your laptop battery. But have you considered how? Simply by lowering and even disabling some of the hardware resources of your portable computer. For example, if this mode allows your four-core CPU to use only two cores, then your CPU will perform below your expectations.

You can open power settings of you laptop by searching “Battery Saver Settings.” Here you can adjust the battery saver percentage.

Most computer and laptop manufacturers claim that their hardware can be overclocked to a certain extent, which is true. But overclocking heats up your hardware, especially the CPU. As a result, it becomes unstable and underperforms during high-end tasks. Excessively overclocking is fatal. 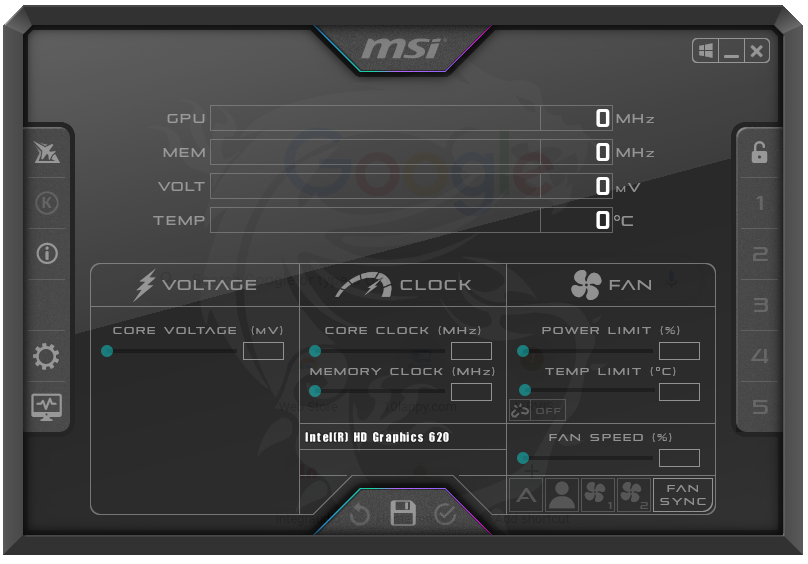 If you have used your CPU continuously overclocked for years, then it might be the case. I recommend you replace your CPU with a new and better one because the current one might not perform as it used to, even when you increase the RAM or GPU. This is because excessive overclocking has degraded its performance.

Thermal Throttling is an amazing central processing unit (CPU) feature. However, because of this feature, the speed or frequency of your CPU is decreased when it is continuously used in overclocked mode or overloaded with multiple processes in the simple mode. As a result, you feel that your CPU is underperforming.

I recommend you never continuously use your computer system for hours and hours, especially when overclocking is enabled. After playing or using your PC or laptop, give it some rest by shutting it down so it can take some rest and cool down. Secondly, never overload it with plenty of apps at the same time.

One reason behind the CPU performing below expectations can be its age. Your CPU may be old. Because the older the CPU is, the fewer cores, it has. And a CPU with fewer cores always underperforms compared to the latest CPUs with multiple cores. So replacing such a CPU is the only option for us.

It is also possible that you have an outdated motherboard running your CPU, but it is not completely supported. It is like installing a 64-bit CPU on a 32-bit motherboard. Sometimes the CPU runs on more frequency, but the motherboard is restricted to a certain limit. In both cases, upgrade your motherboard.

How To Check If My CPU Is Underperforming?

If you are a Windows user, it is very easy to check whether your CPU is underperforming. First of all, just open the apps that you mostly use at the same time. After that, press the “Windows” button to make the “Taskbar” visible in case of a full-screen game. Right-click on the “Taskbar” to open a menu. 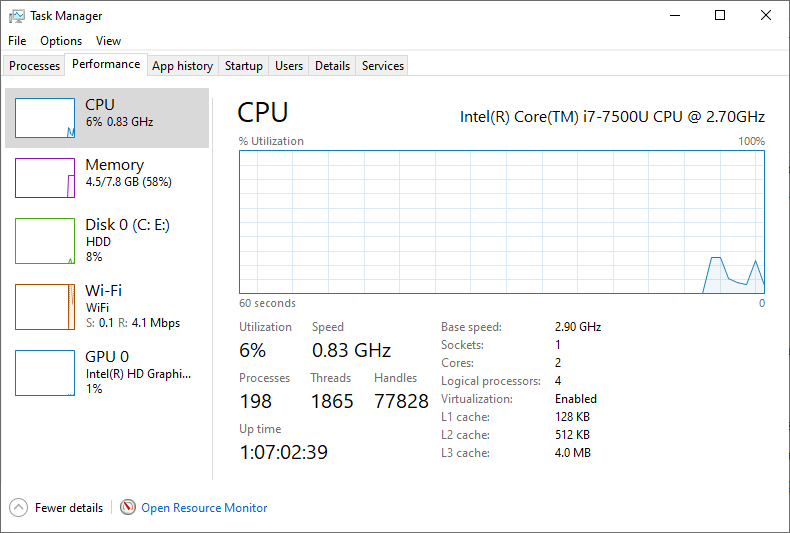 Select the option saying “Task Manager.” Next, switch to the “Performance” tab and select the “CPU” option from the left list. If your CPU frequency is very high, near the maximum limit, and its usage is more than 90%, then your CPU is underperforming.

In the case of an underperforming CPU, if you switch between your apps and switch back to the task manager, then CPU usage will be 100%, and the frequency will also be at its maximum limit. There are also different softwares available for testing the performance of your CPU, such as IntelBurn Test, CoreTemp, AIDA64, etc.

I hope that now you know why your CPU is performing below expectations. It can be because of thermal throttling, old and outdated hardware pieces, excessive overclocking, or unnecessary background apps. Of course, you can try to solve the problem yourself, but in some cases, only replacement helps.