Want to know do APU and GPU work together? APU is (Accelerated Processing Unit); it is a chip located on your motherboard’s circuit board. AMD introduced the first APU in 2011 and the second generation APU in 2012. The APU offers integrated graphics, high-definition video, and high-performance processing and frame rates.

GPU stands for (Graphics Processing Unit); it is a chip that processes graphical data such as textures, video, and 3D rendering. It allows you to game at high resolutions; GPU is not necessary for general computing tasks such as browsing the web, using office applications or watching videos.

Do APU And GPU Work Together?

Both APU and GPU are capable of working together. They accelerate the graphic performance of your computer when used together. However, there are a few things to consider before combining the APU with GPU. Your APU must support the GPU, and the motherboard must have the compatibility to support both.

APUs are also called microprocessors because they support general processing besides providing integrated graphics. As AMD introduced the APU, they called them Fusion. They are 64-Bit Microprocessors that support the CPU in general functioning resulting in high computer performance.

How Do I Switch From APU to GPU?

To switch from APU to GPU, you have to disable the APU. You can disable it through AMD catalyst or BIOS settings. You can also disable the APU from the Device Manager. First, open the device manager, then select the “Display adapters” option. Now right-click the integrated APU and select “Disable”.

Make sure to plugin and installed the graphics card before disabling the APU. Otherwise, you may face display issues after disabling it.

In the case of an AMD processor with APU having integrated graphics, you don’t have to switch to the external GPU. If you are a gamer and want more graphics, then it’s the best option to use both APU and GPU with a higher amount of RAM.

How To Connect APU with GPU?

APU and GPU require a precise selection of motherboards to run both chips side by side. Such integrated motherboards are called APU on-board motherboards. Before connecting, read the motherboard manual to see if it supports the combination. If you are good to go, then here’s how you can do it: 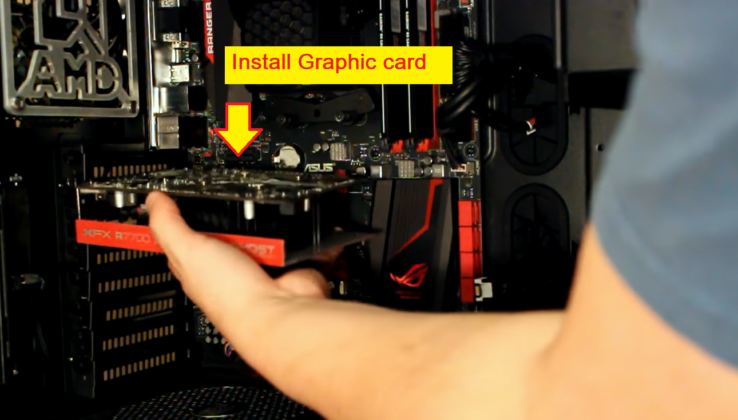 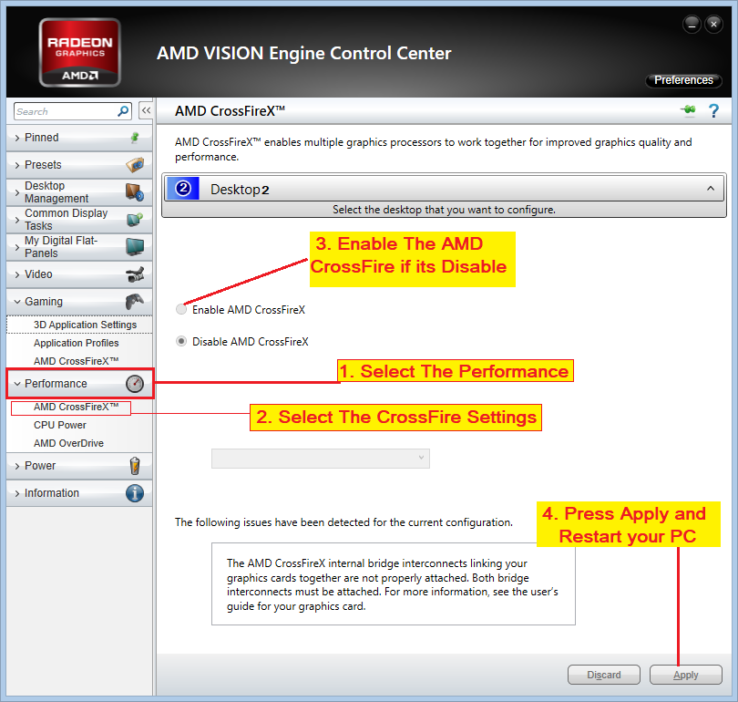 If you are still unable to find the Crossfire or it doesn’t appear on the side menu, here’ is the second method that you can follow. 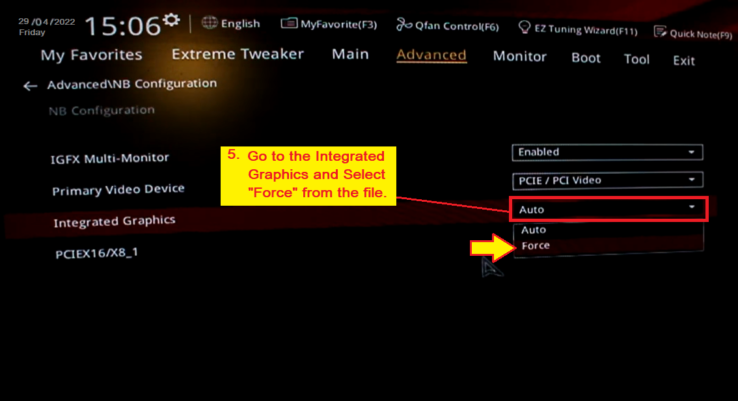 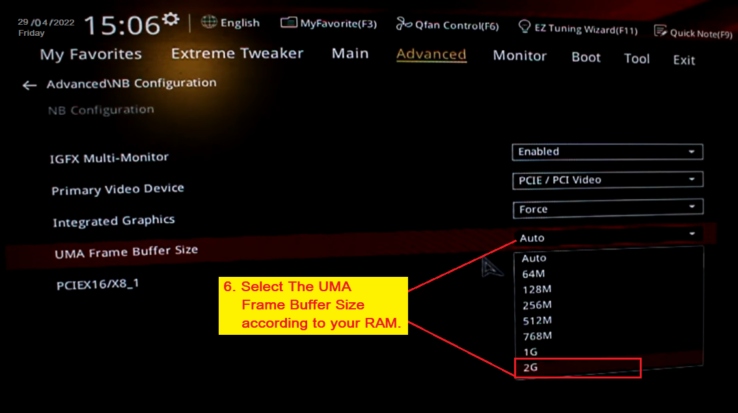 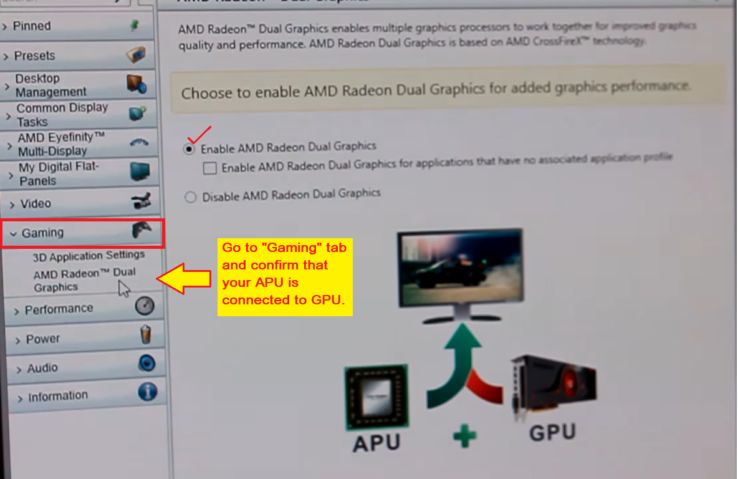 What’s The Difference Between APU and GPU?

APUs are mostly used in terms of a microprocessor or general-purpose processor. However, these APUs also support the GPU to enhance integrated graphics. So, both have similar functions, but which one is more powerful? Here are some key differences between APU and GPU:

This means that an APU can offer better performance and efficiency than a CPU, but the GPU performs more efficiently than APU. As APU has both integrated graphics and processors at the same time. APU has the ability to work without GPU as it has both graphic and microprocessors.

Can You Run Dual GPU with a Single APU?

You have to connect both the GPUs and Crossfire them. Now you have to enable the APU as we have described above. This will enable all three components. The main things you need to consider when using a dual GPU setup are the power requirements and cooling.

Regarding power requirements, it is important to have a power supply that can handle the increased load. Typically, a dual GPU setup will require more power than a single GPU. You may also consider adding a cooling solution for your GPUs if they get too hot.

Is APU Better Than GPU For Gaming?

No, APU is not better than the GPU in any case. GPU provides power to all graphics and textures. While APU just supports the CPU or GPU in processes. It doesn’t directly enhance the performance. If you are looking for a better value option for money, then GPU is better than APU.

You can consider APU if you are looking for budget gaming. You can only get the best performance of APU by combining it with GPU.o The amount of Hertz increases as both APU ad GPU are Crossfire. Even the AMD has launched their APU chipsets that directly work with GPU without external support.

As APU affects your computer system’s available memory (RAM), it may decrease the gaming performance if you have a limited amount of available RAM. So, if you have a low-end gaming computer with limited RAM, the GPU would be a better option.

This motherboard from Gigabyte comes with an AMD E2100 APU and an integrated Nvidia GeForce 210 GPU. It has two slots for DDR3 memory and one dedicated card slot. The GA-E2100N is a great choice for those who want to use an APU and a GPU together.

The B450I Aorus Pro WiFi from Gigabyte is another great choice for those who want to use an APU and GPU together. It comes with an AMD Ryzen 5 2400G APU and an integrated Radeon RX Vega 11 Graphics and also has two DDR4 memory slots. Unfortunately, it only has one dedicated graphic card slot.

The ASRock B450M PRO4 supports AMD Ryzen 3 2000, 3000, 4000 G-Series APUs. Install integrated Radeon RX Vega 8 Graphics for the best APU and GPU combination. It also has four slots for DDR4 memory and up to one slot for the dedicated graphics card.

So, do APU and GPU work together? The answer is a yes! Both APU and GPU can provide a significant performance boost for your computer when used in tandem. However, there are a few things you need to keep in mind before making the switch. First, make sure that your APU supports the graphics card you want to use. Second, make sure that your motherboard is compatible to support both components.

Do APU And GPU Work Together? Answered & Explained

Will Overclocking Damage The GPU? Does It Reduce Lifespan?

Do I Plug My Monitor To My GPU Or Motherboard?

How Do I know if my GPU is Getting Enough Power?

Why Do GPU Only Have 1 HDMI? Answered & Explained!