The (ECC RAM) Error correction code memory is a type of volatile memory storage that employs an error rectification code (ECC) to identify and fix n-bit corrupt data that happens in the storage (memory).

It is used in most computers where input integrity cannot be acceptable, such as microcontrollers, applications, vital databases, and infrastructure memory caches.

The most common method is to look for the Motherboard Manufacturer Manual and see if the motherboard supports ECC RAM. The other way to find out is the Chipset Compatibility as the chipset regulates if it supports the ECC RAM.

Wit that said, there exists two Type of RAMs (memory):

The difference between the two is that non-ECC memory does not have the capabilities to safeguard your system from a potential crash as ECC Memory protects your computer by correcting any inaccuracies in the data. However, non-ECC memory is speed-oriented memory, whereas ECC memory is your endurance/reliability memory.

We have written detailed information below about how the user can find out if the motherboard will run ECC RAM:

Memory is commonly divided into 72-bit chunks (8 bits read at a time from each of 9 data chips), with 64 bits of data and 8 bits of error correction in each chunk.

Simply search for the motherboard on the manufacturer’s website and get the pdf manual. It should indicate what kind of RAM the motherboard supports. ECC memory is only supported by workstation and server-class motherboards. Some motherboards are capable of supporting both.

ECC RAM is either supported or it is not. There is no middle ground or hacks.

The chipset on your motherboard determines whether it is compatible with ECC RAM. ECC RAM cannot be used in a non-ECC motherboard. Determine the brand and model of your motherboard first. Then, look it up on the manufacturer’s website to see what chipset it employs.

They may also specify if it is compatible with ECC RAM, so avoiding the final step. Finally, check the RAM compatibility of the chipset on the manufacturer’s website or Google.

In short, If the motherboard is not Server Grade the ECC RAM will not be supported.

On Windows, user can find out using the following command:

The results will be as follow in either case:

If the Total Width value is greater than the Data Width, the current RAM is ECC Memory or vice versa.

To determine the ECC status of the computer and each RAM module on a Mac, use the System Information application.

Select Memory from the Hardware section on the right panel.

Then choose the “Memory Slots” listing. The ECC status should be displayed in the window below.

Please see the image below: 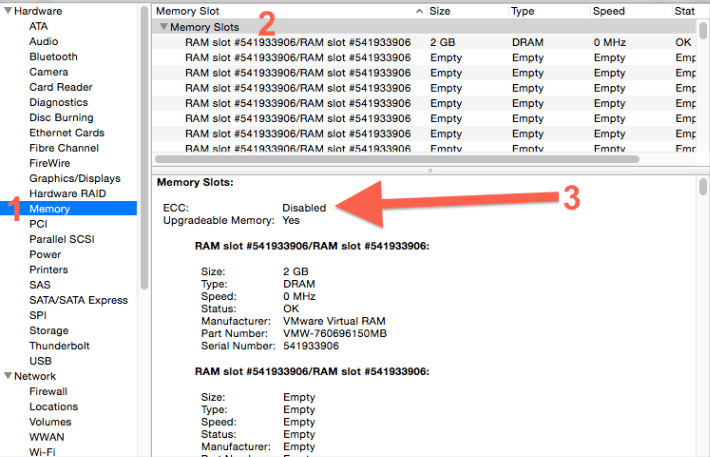 ECC memory is supported by both Intel’s Xeon CPUs and AMD’s Epyc server lines. It should be noted that in order to use ECC memory, both the processor and the motherboard must support ECC memory.

Most Intel processors (even some low-cost Celeron variants) will support ECC memory in today’s mainstream platforms, providing you use a motherboard that supports such memory.

All AMD Ryzen processors support ECC memory when used with a suitable X570 chipset motherboard, whereas the B550 chipset does not support ECC memory when used with Ryzen 2000 CPUs. For ECC functionality, Ryzen CPUs with an integrated graphics card or accelerated processing unit (APU), as well as the 3000 G-Series and 4000 G-Series, will require the use of a PRO processor.

Below is the overview Table from ASUS with Ryzen CPU ECC Support:

When your RAM and board are incompatible, you won’t even be able to install it on the board since the slots have different notch locations than the RAM.

Even if the slot and the module are the same size, don’t try to force it. This could result in permanent damage to the board or the RAM module. If you find yourself in this circumstance, see if you can swap out the module for a suitable one.

If you already have RAM, try plugging it in. Notches on ECC RAM boards differ from those on normal RAM. It will fit if your motherboard supports it. If they don’t fit (don’t force it), you’re out of luck – they won’t work.

The only difference is that if your motherboard is not for a server or an older MacPro, it will not accept ECC RAM DIMMs.

Hopefully, you now have a better understanding of memory and motherboard compatibility. In this section, we looked at how to tell if RAM would work with your motherboard or not.