Are you planning to overclock your CPU or GPU? Of course, but still confused about the proper cooling system or wondering Does Increasing Fan Speed Damage The Fan? Both components, CPU and GPU, can be overclocked and have cooling fans on them. However, it is necessary to adjust their speed while overclocking.

It’s no secret that an increase in fan speed can help cool your device down, but is there a point where increasing the fan’s speed can damage the fan itself? This blog post will explore what could happen if you run your fan too fast for too long. We’ll also provide some tips on how to avoid damaging your fan.

No, increasing the fan speed will not damage the fan. The fan is designed to operate at a range of speeds, so it can handle being increased. However, running the fan at its highest setting all the time can shorten its lifespan. Therefore, it’s best to use the higher speeds when needed, such as when the room is high.

CPU or GPU fans are operated automatically by your PC. But, if you want to overclock your PC, you need to increase the speed of the fans manually. You can use fan controllers or software like SpeedFan and HWMonitor to control the speed of your CPU or GPU fan.

But, it is not recommended to run the fan at its highest speed all the time as it will decrease the lifespan of your fan. Instead, it is better to use high fan speeds only when necessary, such as when the room is hot, overclocking, or gaming. 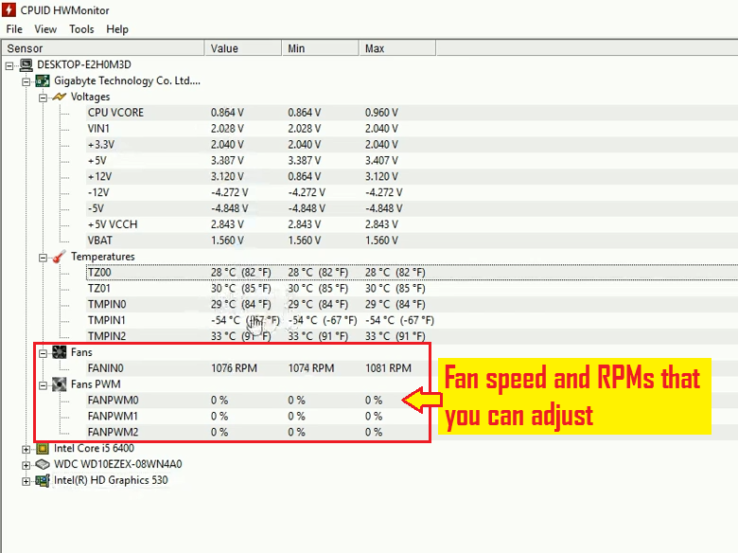 Also, make sure that you have good ventilation in your computer case so that the air can circulate properly. It will help the fan cool down the components inside your case more effectively. Fan speed has a direct impact on the temperature. Increasing the fan speed reduces the temperature.

What Percentage Should Fan Speed Be?

You should keep your fan speed around 50-60%. It is a good middle ground. It will help keep your computer cool while also not making too much noise. The fan speed depends on several factors, including the time of day, environment, processes, etc.

Here are some situations and their respective fan speed:

In extremely hot weather, the internal temperature of your PC increases. It results in overall component heating. Your fans also start to run faster than average speed. But if they aren’t, you have to set their speed manually.

During any kind of heavy processing, your CPU generates more heat. That’s why it is important to set the fan speed according to the level of processing. For example, if you are just doing some light browsing, then 50% should be good. But if you are encoding videos or gaming, you should increase it to around 80%.

Overclocking means running your CPU or GPU at a higher than normal speed. It generates more heat and puts more strain on the components. That’s why it is important to have good cooling when overclocking. You should set your fan speed to around 100%

You can keep your fan speed at around 50-60% for normal use. It is because, in general use, your CPU or GPU is not overheating or generating more heat. So it’s totally fine to run their fans on low speed.

How to Control CPU or GPU Fan Speed

There are two methods to control your CPU or GPU fan speed. One is through BIOS, and the second is through fan speed software. Both are easy-to-follow methods. Here is how you can do that: 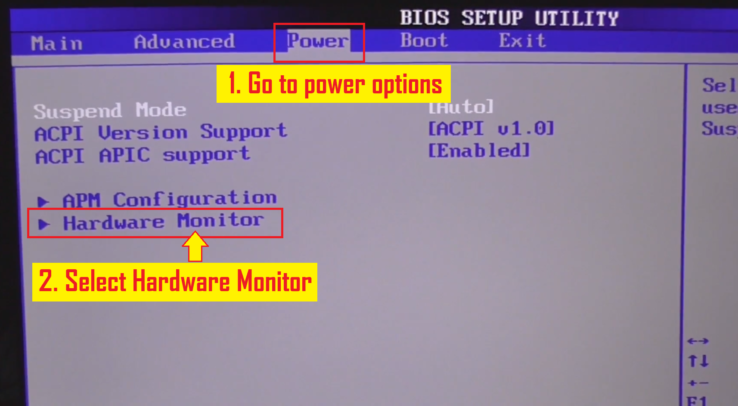 Several software applications like SpeedFan, EasyTune 5, and Argus Monitor. are used to adjust the fan speed. You can download these applications and control your fan speed according to the situation. Here is how you can do it using SpeedFan: 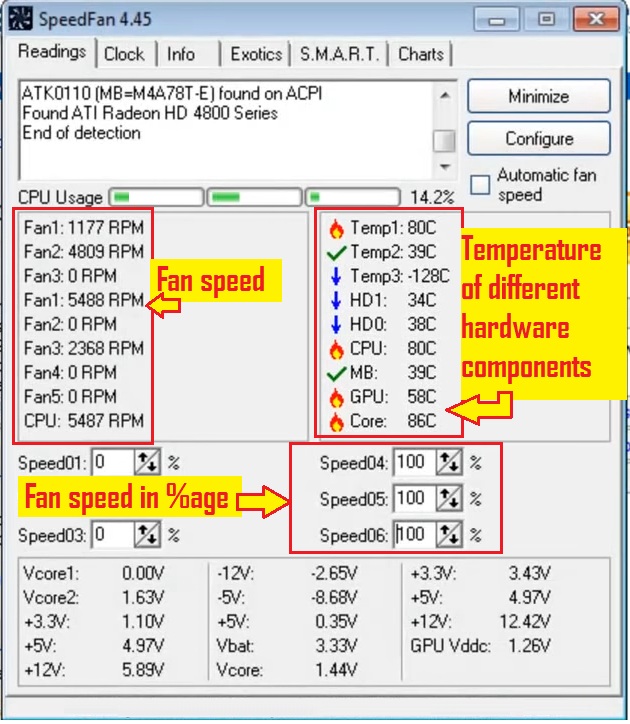 Is It OK to Increase Fan Speed of Laptop?

No, it’s not OK to increase the laptop’s fan speed. It is because the laptop fan is designed and programmed to use the auto-function feature. This auto-function runs the CPU fan according to the temperature and tasks. Therefore, controlling the fan may cause errors leading to CPU fan damage.

If your fan is not working properly, you can use software like NoteBook Fan Control. Such software allows you to customize your laptop’s fan speed if it’s not performing well. However, we recommend not to fiddle around with such settings if you are not tech-savvy, as it can lead to irreparable damage.

If your laptop is still overheating, it is better to take it to a service center and get it checked. Overheating can damage the internal components including CPU, GPU, RAMs, and hard drives. Proper ventilation is a must for the better performance of your laptop.

Does Increasing the Fan Speed of a Laptop Lowers Its Temperature?

It’s not recommended to control the laptop’s fan speed as auto sensors control it. They reduce the speed when your CPU isn’t heated and increase when you do heavy tasks. Another way to reduce the temperature of your laptop CPU is to clean the fan. For example, you can use compressed air to blow out dust from the vents.

You should also keep the laptop well ventilated. Place it on a flat surface and avoid blocking the vents. If you’re using your laptop on your lap, consider using a cooling pad to help dissipate the heat.

No, there is nothing bad about setting the fan speed to 70% full-time. In fact, doing so can help to improve the overall cooling of your PC and prevent overheating. Doing this ensures that more air is circulated to the components at all times, which helps keep the temperatures down.

Of course, you should only increase the fan speed if your laptop is starting to overheat. If the temperatures are already within an acceptable range, there is no need to change anything. Also, be sure to keep an eye on the fan’s noise level. If it becomes too loud, reduce the speed slightly.

In the case of laptops, you don’t need to increase or fix the fan speed manually to 70% full-time. It’s bad for the laptop CPU, battery, and fan. Instead, laptops have a built-in system that automatically adjusts the fan speed according to the workload and temperature.