And what happens if you don’t update?

A BIOS update is not necessary except in cases where you must update. For instance, if there is a bug that only a BIOS update can fix. In that case, you must be careful and run the update correctly to avoid dire consequences. A BIOS update will not increase the speed at which your computer runs, nor will it add extra or new features to your PC.

The only criteria for a BIOS update should be if the update will give you a much-needed improvement or if it will fix a problem in the computer. Installing or updating a laptop BIOS update is very dangerous and, if done wrongly, can completely brick your computer. A bricked computer will not work at all.

We are not saying that you should not update your BIOS. Instead, you should know when and how to update correctly to avoid damaging or permanently destroying your PC. This article will explain if a BIOS update is necessary and what happens if you do not update it.

What Is The Benefit Of Updating BIOS 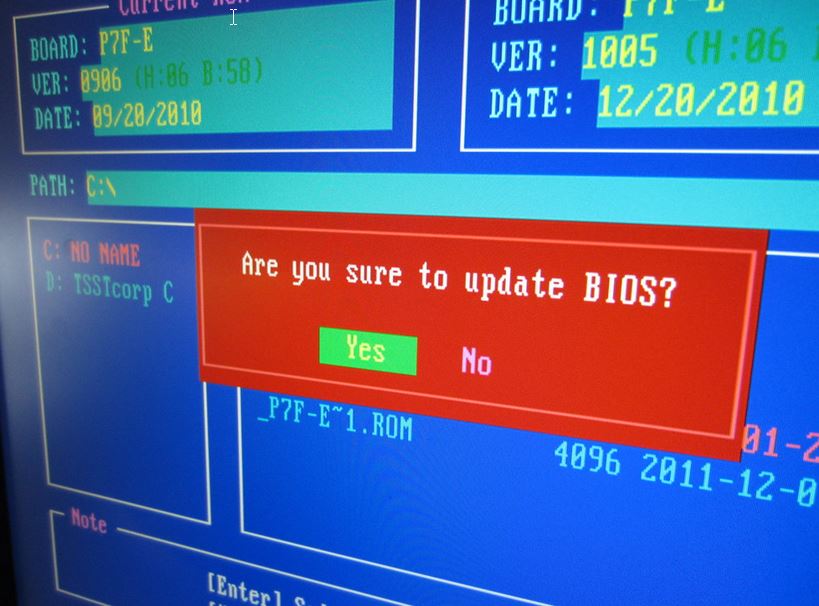 BIOS update is only necessary for hardware and bug issues that only the update can resolve. If you are not experiencing any of these problems, do not update. It is best not to fix what is not broken. Else you might end up with new issues.

What Happens If You Don’t Update BIOS

Nothing happens if you do not update your BIOS except that you will not benefit from improved hardware updates. Your PC will keep running as it always has. BIOS does not increase performance. If there is no need for the update, do not update.

The updates very essential for your computer are the driver updates. When you get a BIOS update alert, go through the list of improvements. If there is none you need, you should avoid the update. Your PC will keep working at its capacity with no adverse effects.

Do You Need To Update BIOS After New Ram? Answered

You do not need to update BIOS after installing a new RAM. However, if a problem requires a BIOS update for your new RAM to work, you can update the BIOS carefully. BIOS update is only necessary for components that work together with it and are of an older or newer version.

An example is the CPU. RAM is one component that communicates with the same functions and does not need any update from other features to function efficiently. Do not forget that you can update only at the most necessary.

It is best to check for the amount of RAM your PC supports before attempting to increase the memory. Updating your BIOS or CPU will not allow your device to accept more RAM if it should not.

What Is A BIOS

BIOS is an acronym for basic input/output systems. It is firmware stored in a chip inside your computer motherboard. The BIOS is responsible for controlling the booting procedure of your PC. it starts the power-on Self Test (POST) and gives up control to the boot loader to boot the computer operating system.

The activities of your computer BIOS should never intervene or get in the way of anything you do on the computer. You will rarely feel the effects of an outdated Bios system during your day-to-day activities.

You can access the BIOS menu screen on your windows PC by pressing the BIOS keys set by your computer manufacturer. The keys are often any among these, F10, F12, F2, F1, or DEL. However, you don’t have to have an excellent knowledge of BIOS because it remains in the background of your PC activities.

How Do You Know If Your BIOS Is Outdated

You can know if your BIOS is outdated by checking the BIOS’s version on the system information window. Click windows+R and type “msinfo32,” and press enter. This method works for windows 7,8 and 10. You can also run your computer update utility which will provide the current version and the availability of new versions.

How Long Does A BIOS Update Take

A BIOS update takes around ten minutes to complete. However, considering the effects of anything going wrong, it is best to go with a thirty minutes timeframe for safety purposes. While updating, plug the computer into a light source and ensure the laptop has uninterrupted power throughout the update period.

What Happens If BIOS Isn’t Updated For Cpu

If your BIOS is not updated for the CPU, your computer will not boot because the BIOS does not communicate, recognize or support the CPU version. If you must update your BIOS, do that with the CPU in mind.

Can I Skip To the Latest BIOS Update

Yes, you can skip to the latest BIOS update. BIOS updates are standalone updates. They do not need the previous ones to work because they are cumulative in nature, so it’s okay to skip or jump to the newest version.

What Do I Do If My BIOS Update Is Stuck

Updating your BIOS is only necessary when it is the only solution to your PC’s problem or if you need the improvement that comes with it. However, you should be careful and have a steady power source because interruptions can brick your computer.

BIOS update does not increase the performance capacity of your computer. We do not recommend it or else necessary to expand your hardware or fix a bug. This article has adequately addressed the question of “is BIOS update necessary? What happens if you don’t update”? Now you know what to do.

We are experienced bloggers primarily focused on CPU, GPU, HDD, SSD, Motherboard, CPU Fans, and other components. We decided to share our knowledge.