The Central Processing Unit, CPU in short, is the most important computer system hardware. It is considered the brain of a computer because it performs and controls most of the operations. During its working, a CPU reaches high temperatures; this is why it is continuously cooled down using a liquid cooling system.

Do You Have to Maintain CPU Liquid Cooling?

If you have installed a closed-loop CPU liquid cooler from a well-known company, you must do flushing and refill the cooling kit. Instead, you only need to clean the fans and the radiator because these two will dissipate the heat from the water in the air. If the radiator is dusty, the CPU will overheat.

On the other hand, if you have a leaky CPU liquid cooler that a well-known company does not manufacture, and someone with less technical knowledge has installed it. Then you need to maintain it and refill it again to work properly. It is because such a kit has air bubbles, preventing the heat from radiating.

What is CPU in a Computer?

CPU stands for Central Processing Unit, and it is the hardware that performs and controls nearly all of the processes in a computer. For example, when we run an app or software, it is the CPU’s responsibility to execute it. It also generates the addresses when we copy-paste our data from one storage to another.

The latest CPUs are multi-cored, meaning they can perform multiple tasks simultaneously. The CPU is firmly connected to a motherboard and has a heatsink with a fan to keep it cool. Some high-end CPUs that become very hot while working need an extra cooling system, such as liquid cooling.

What is CPU Liquid Cooling?

As the name suggests, it is a cooling system for the central processing unit of a computer system. A CPU becomes very hot, especially when high-endhigh-end applications and softwares, such as gaming, video editing and exporting, 3D modeling, rendering, etc., are run.

Therefore, it is necessary to keep it cool during such opeDifferent methods are used to keep a CPU continuously cool to prevent it from being used. The first method uses a heatsink in contact with the CPU using a conductive thermal paste. The heatsink has many thin metal plates and a fan that keeps on spinning to radiate the heat in the air.

On the other hand, we have a CPU liquid cooling system available as a kit. It has water tubes that keep pumping to keep the CPU cool. It is the most efficient technique because water conducts heat 30 times faster than air. Liquid cooling kits are not bound to the CPUs; they are also available for graphics processing units (GPUs).

If the fan has stopped spinning, you will need to shut your computer system down and fix the issue because the fan is responsible for dissipating the heat in the air. If this air gets stuck inside the casing, the other hardware will be affected by it and lose its performance. The CPU can burn out in such cases.

If the pump doesn’t work properly, you should change it as soon as possible. The pump is responsible for keeping pumping the distilled water in the tubes, just like a heart. Unfortunately, the hot water stops inside the CPU liquid cooling kit when the pump stops. As a result, the CPU gets overheated instead of cooling down. Try to clean the pump yearly because most CPUs burn out when stuck or become out of order.

Does CPU Water Cooling Need to be Refilled?

The water tubes of a CPU liquid cooling kit are leak-proof and do not break until someone accidentally detaches them. Once you have purchased and installed a CPU water cooling kit, you never need to refill it because the water-containing tubes are very robust. In addition, the kit itself has no way from which the water can evaporate or leak.

Hence, I recommend you change the water, nor does the CPU water cooling need to be flushed and refilled again and again like a board marker. Such water cooling kits are known as “All-in-one” (AIO) liquid coolers with a radiator and a pump to keep the water running in the cooling system.

How Do You Maintain a Liquid Cooling System?

The first thing to maintain in a liquid cooling system is its leaky parts. If your CPU liquid cooling kit is leaky, it will harm the other hardware, including the motherboard, and lose all of its water, overheating and burning out the CPU one day. So try to seal your liquid cooling kit properly first. 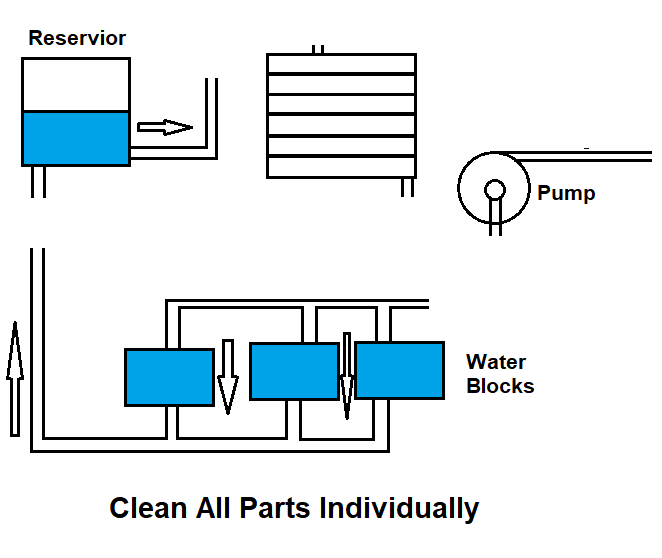 The second parts of a CPU liquid cooling system to maintain are the fan and the radiator. The radiator collects heat from the distilled water inside the tubes, and the fan radiates it in the air. If the fan is dusty and slow, you should consider cleaning and lubricating it. Do clean the radiator as well from time to time.

The pump plays a very important role in a CPU liquid cooling kit. It pumps the hot water toward the radiator to absorb and dissipate heat in the air. Hence, they need to be checked and maintained every 12 months because a stitch pump does not help in cooling down the CPU. As a result, the CPU loses its performance or burns out.

Is Liquid Cooling Worth It For CPU?

Liquid cooling dissipates the heat 30 times faster than the old and traditional cooling system with a heatsink, two or more tubes filled with thermally conductive paste, and a fan radiating the heat in the air. The credit for this outstanding cooling goes to the distilled water inside the tubes.

In simple words, if you use a liquid cooling system, then it will cool down your CPU more or less 30 times faster. Liquid cooling is an efficient system that increases the performance of your CPU by keeping it continuously cool. I recommend it for high-end computers for gaming, rendering, video editing and exporting, etc.

Some CPU liquid cooling systems use premade coolants of different colors as well. Using those coolants is no problem because well-known manufacturers have conducted multiple successful experiments before launching their products. Your liquid cooling kit will work efficiently in both cases.

What Liquid is Used for CPU Cooling?

Distilled water is used in CPU liquid cooling kits because it cools the CPU down 30 times faster than the traditional CPU cooling system. It is why you must have seen in the movies that water is used for cooling down huge computer-based systems. Distilled water is pure water from which the minerals and impurities have been extracted. 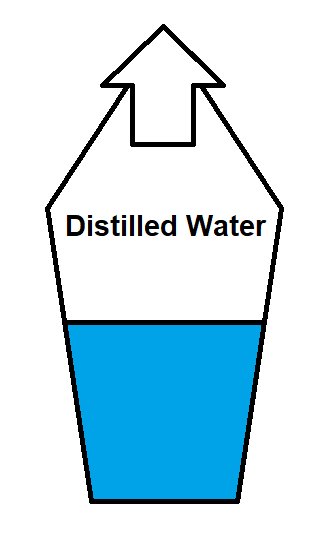 The water in the liquid cooling system mostly differs from the water we see and use daily. It is not only because it is distilled, meaning it is pure water without any minerals and impurities, but it also has a color added to it. You can also change the color of your kit’s water by adding different colors.

If you maintain your PC liquid coolers from time to time, they last longer. But their lifespan depends on their maintenance and the manufacturer. For example, if you have a custom-built CPU liquid cooling kit, it should last from 12 months to 3 years maximum. 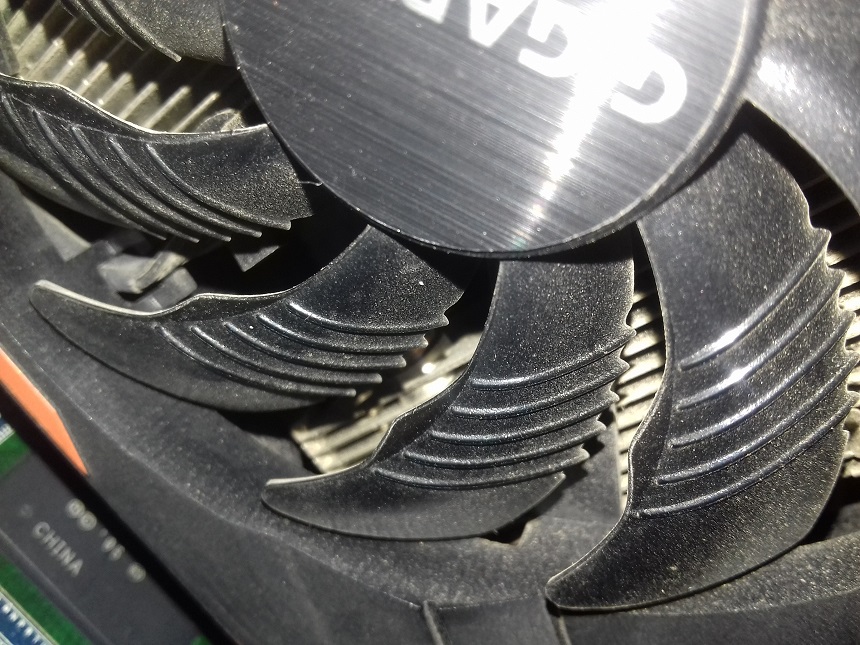 On the other hand, if you have an AIO (All-In-One) liquid cooler with a well-known manufacturer, it will work for 3 to 6 years without requiring any special maintenance. It is because neither it leaks and evaporates its liquid nor does its pump and radiator fan stops working.

Yes, the liquid-cooled PCS freezes when Ethylene Glycol is used. It is because its freezing temperature is 8.8 degrees Fahrenheit or about -13 degrees celsius. That is why it is mixed with water in your liquid cooling system to stop water from freezing. Some antifreeze is used to fix the freezing issues as well.

Do Liquid Coolers Run Out of Water?

The AIO liquid cooling kits that a well-known company manufactures never run out of water. They only become out of order when their lifespan is completed. On the other hand, the custom build and leaky CPU liquid cooling system lose its water over time. Either it evaporates, or it spills inside the casing.

As a result, such a liquid cooling kit not only becomes out of order too early but also damages the other hardware, such as the motherboard, RAMs, GPU, CPU, etc. It happens when the water drops moist the electronic components on computer hardware and short them after mixing impurities and dust.