The computer is considered as most important and worthy invention, it is the electronic machine that is automated to perform different functions by sequences of arithmetic or logical operations.

Different modern computers can perform generic sets of operations known as programs. The computer follows the instructions that help them to accomplish a wide variety of tasks ranging from simplest to complex.

Moreover, a central processing unit (CPU) is considered the “Brain of the computer” and is the most significant component. It is an electronic circuitry able to perform instructions.

3 Factors you should consider before overclocking a laptop’s CPU

If you intend to overclock the laptop’s CPU then we recommend you look at these factors to avoid any sort of problem at later stages. So, let’s have a look.

CPU temperature is very important to check your laptop CPU’s temperature. You need to keep an eye on the temperature because overclocking will make it rise. If the temperature exceeds too much then it decreases CPU lifespan or may damage the battery. Hence, it is essential to check this factor to save from any kind of damage later.

Before overclocking, it is a good step to check your CPU’s current performance. It will give an abstract idea about how much performance you will need further to run different programs or software smoothly. There are different apps available that will tell you about the CPU performance of your laptop.

Stress testing is the procedure of determining the capability of a PC, network, or device to uphold a certain level of efficiency under critical circumstances. If you want to accomplish CPU overclock, then you should go for stress testing the CPU. These are some of the factors that you must perform before doing overclocking safely, but if you do not take these factors seriously it can lead to overheating issues that could then choke the whole laptop’s performance or cause system failure.

When should I consider overclocking?

If you need high performance for gaming, 3D animations, simulations, or some software that needs a powerful CPU to manage the resources then you can think about overclocking your laptop’s PC. Moreover, you can also do so if you think that the current performance of your CPU is very inconsistent and unable to fulfill your requirements.

Overclocking a PC is essential if the system is old or it if its components are outdated. In this case, you will observe the prominent result in performance after overclocking.

If you go ahead with overclocking, it will assist you in doing your work easily including day-to-day activities, gaming, and many other works that you might want to do with high performance. Furthermore, it saves your money as compared to the price of upgrading to a fresh CPU or even buying a new PC or laptop.

The critical temperature for CPU

Running for a prolonged period above 85 degrees can extremely damage your CPU. If the CPU does hit huge temperatures, it could damage your device.

11 Steps to overclock your system’s CPU

These are the following steps to overclock your system’s CPU:

Visit BIOS (Basic Input/Output System): During overclocking, you are trying to make a variety of modifications in your computer’s BIOS area. Bios is considered as configuration menu of PC. It can be edited before the operating system is loaded. Moreover, Utmost Bios can be retrieved by gripping the ‘del’ key during the computer is booting up.

As different systems BIOS’ are different so that is the reason menu labels and locations can differ from system to system.

In this step, you need to invest the majority of your time. It will permit you to modify the CPU’s clock speed and rate of voltage it gets. You are supposed to switch to the advanced frequency settings.

Upturn the Base Clock by 10%

Upsurge Base Clock till the System Becomes Unsteady

After each base clock setting, perform a benchmark test every time to reach an unsteady state. The uncertainty is caused by not getting sufficient energy from the CPU.

If the motherboard does not regulate the multiplier, just replicate the upsurging of the base clock. A good and effective overclock can contribute as much as a 20% performance enhancement or more, as long as you are eager to put in the struggle. In addition, learning to securely regulate the processor’s clock speed can provide you with better knowledge of which manner the device function.

Reduce the base clock

If the base clock is already being dropped a bit, then start rising the multiplier. Raise it to 0.5 increments. The multiplier is normally known as CPU Ratio and runs a stress test.

Check out the temperatures

Moreover, you also need to consider the temperature level throughout the overclocking procedure. You have to find out the best grouping of the base clock and multiplier. Every CPU has changed the safety temperature variety. Usually, it is suggested that the CPU should not reach 85 °C.

It is usually denoted as V-core Power. But keep in mind that raising the power or voltage level beyond a safe limit can damage your device. This task is generally the most complicated and precarious part of the overclocking process.

Furthermore, the CPU and motherboard can manage voltage upsurges up to a limit. Each CPU and motherboard has its limit that vary from one another, not necessarily the same for all. So, this step needs your extra care. Start rising the core voltage. Surge the voltage in 0.025 increments and run a stress test on the intended machine.

Repeat the Cycle to the Extreme Voltage or Extreme Temperature

Afterward, you will reach a stage where you will not be able to add in increments, or your temperature may reach dangerous levels. It will be the critical point between the motherboard and the CPU of your device.

Usually, you should not increase the current more than 0.4 above the original level. Raising above 0.2 is considered a good one.

If the temperature is beyond the safe limit reaching the satisfactory voltage increase, in such case you need to pay extra money to install a heatsink or some cooling paste.

Now, lesser the base clock or multiplier to the last working settings. It is now the new processor speed. If no problem occurs and everything is working ok, then the device is prepared for the final test.

Now, you need to increase the memory speed to its preliminary levels. Remember that you need to do this gradually, perform stress testing, and run a long stress test. 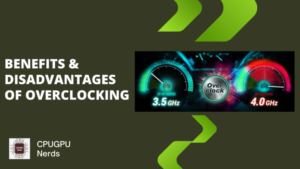 These are the following benefits of overclocking:

The key objective of overclocking is to enhance performance. Some graphics-based programs or software or games need heavy graphics that can never be attained without overclocking. Overclocking a CPU/GPU will ultimately raise the clock speed which increases overall performance.

Overclocking a hardware module leads to cost-effectiveness in many ways. As an example, users can buy a graphics card at a low price and overclock them to attain an efficiency like a higher model. Thus, users can be able to play high-end games still without spending too much money.

Some hardware builders especially GPU permits overclocking at a certain level. The performance is let down purposely to decrease energy consumption. Through means of overclocking, the users can enjoy its full potential, in terms of better graphics and quick response time.

Overclocking also assists old devices to function like newer ones. Particularly for the devices with no removable hardware components utilizing overclocking, a user can confirm that it accomplishes current system desires.

Following are the demerits of overclocking:

Most of the guarantees of hardware are abolished after overclocking them. The clock rates of such devices are set up to a level that they can display their all-out functionality.

Overclocking at an advanced level will affect or damage the hardware components. Hardware that is exposed to overclocking inclines to get more impaired due to the current passing from it. Consequently, the overall lifetime of a hardware module is significantly reduced.

Additionally, overclocking produces an extra amount of heat which causes overclocking of different components. The fan and the heat sink alone are not enough to remove this additional heat. For this purpose, an appropriate cooling system needs to be connected. Without a cooling system, the system could experience numerous crashes or even damage the hardware forever.

A CPU/GPU which passes through the process of overclocking will possibly discharge heat a lot. For dispelling this heat, fans run at full speed which in results produces a loud noise. These noises considerably can create a disturbance.

Even overclocking will enhances the efficacy of a hardware component but at the same time, it could increase the amount of power consumed. The increased clock speed continuously draws more energy. Therefore, the system that passes by the process of overclocking cannot be energy effective.

As CPU can control and execute instructions so it is very important to have a powerful CPU. If your laptop CPU is slow, your laptop will not be capable to perform processing smoothly and you will experience lags and hands during gaming. Similarly, 3-D animations take time and if you have to go ahead with them, you cannot do it smoothly. Ultimately you won’t be able to understand experiment analysis due to slow CPU problems.

So you can say that the CPU performs every task with clock synchronization so if the clock is slow, CPU performance will slow down.

Hope so, you can understand the importance of CPU in the computer system and now if you are facing the problem of a slow CPU then you can relate to how frustrating and annoying it is. 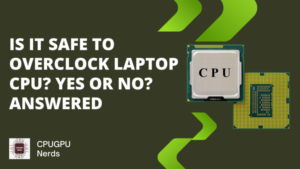 Sometimes a question may arise in your mind about how can I speed up my CPU? Is there a way to do that?

If it is so, then you might know about Overclocking CPU? Overclocking is the procedure of purposely increasing the frequency of clock cycles beyond the default setting. This is done because faster clock speeds assist processors to complete tasks quickly.

By doing this you can considerably expand the CPU’s capacity to manage workloads produced by games or smoothly running simulations.

Overclocking of CPU hints toward increasing clock speed that ultimately increases the performance for heavy applications like gaming, simulations as well as video editing.

In this article, we have mentioned every detail about overclocking procedure and why you need to do this. We have discussed all the pros and cons associated with overclocking so if you are willing to pass your device from this process you may know all the merits and demerits.

A detailed procedure with all the steps for overclocking is also mentioned above. So if you are thinking to overclock your laptop’s PC, then you must read this article to know whether it is suitable for you or not.