Motherboard manufacturers are quickly phasing out DVI and VGA ports from their products, but there are still a few models on the market that include these legacy connectors. So why would a modern motherboard still have DVI and VGA ports? Here’s a look at some of the reasons.

Many people still use older monitors that only have DVI or VGA ports. At the same time, HDMI has become the standard for most newer monitors. Therefore the manufacturers still have to include DVI and VGA ports in their motherboards. Therefore, having DVI or VGA  available can be a valuable perk.

Why Would A Modern Motherboard Still Have DVI And VGA Ports?

It’s because DVI and VGA are still popular standards for video output; including them on a motherboard allows for more excellent compatibility with a wider range of display devices. Secondly, DVI and VGA ports are less expensive to include on a motherboard than HDMI, so it’s cost-saving for manufacturers.

New motherboards do not support VGA because they require graphic card support for display, and new graphics cards have HDMI or DVI ports for video output. However, old monitors use VGA, and new LED monitors support HDMI, so there is no need for VGA support on new motherboards.

You can still find some motherboards with a VGA connection to connect to a projector or monitor. For the most part, though, VGA is becoming increasingly obsolete. However, if you’re still using an old monitor that supports a VGA connection, you can buy an HDMI to VGA connector. 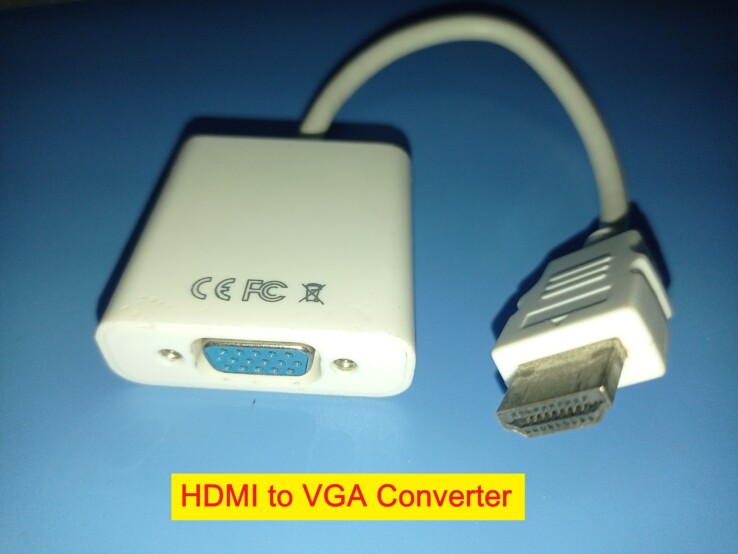 Yes, most new motherboards support DVI. DVI is the digital standard for connecting monitors to PCs. Even if your monitor doesn’t use DVI, your motherboard will have the port anyway. That’s because graphics cards also use DVI. So if you have an ancient monitor or graphics card, you should be good to go with DVI.

If you’re not sure whether your motherboard has DVI, take a look at the back of the computer. It will have all of the various connectors for different peripheral devices. If there’s a DVI connector, then your motherboard supports it.

DVI comes in different types. There’s DVI-I, which supports both digital and analog signals. And then there’s DVI-D, which is digital-only means supports single-link only. Most new motherboards will have DVI-I. But if you have an older motherboard, it might just have DVI-D. 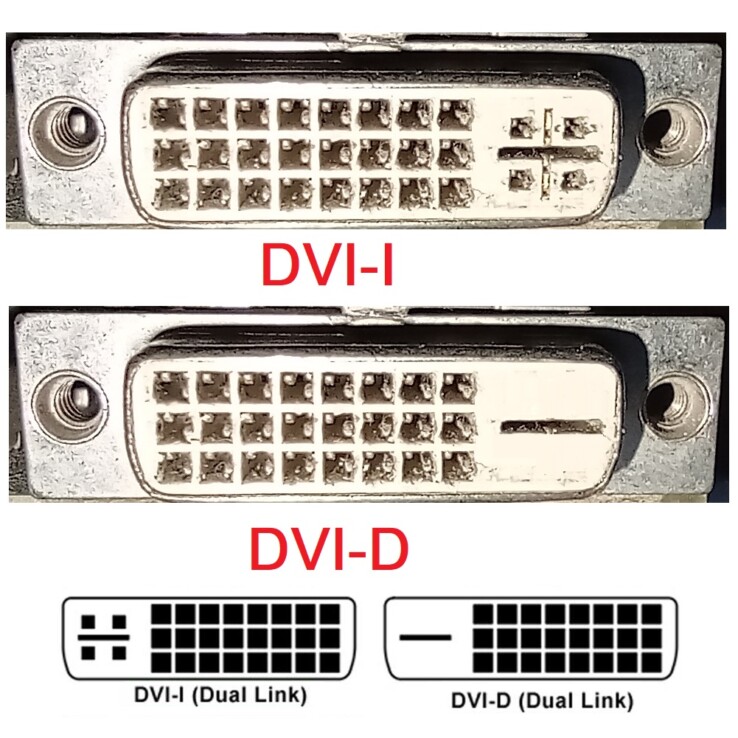 Do all motherboards have DVI and VGA?

If a motherboard only has one or the other, you can still use an adapter to connect to a monitor that requires the other type of input. So, for example, if you have a motherboard with only VGA output and you want to use a DVI monitor, you can buy a VGA-to-DVI adapter. Again, these are relatively inexpensive and easy to find. 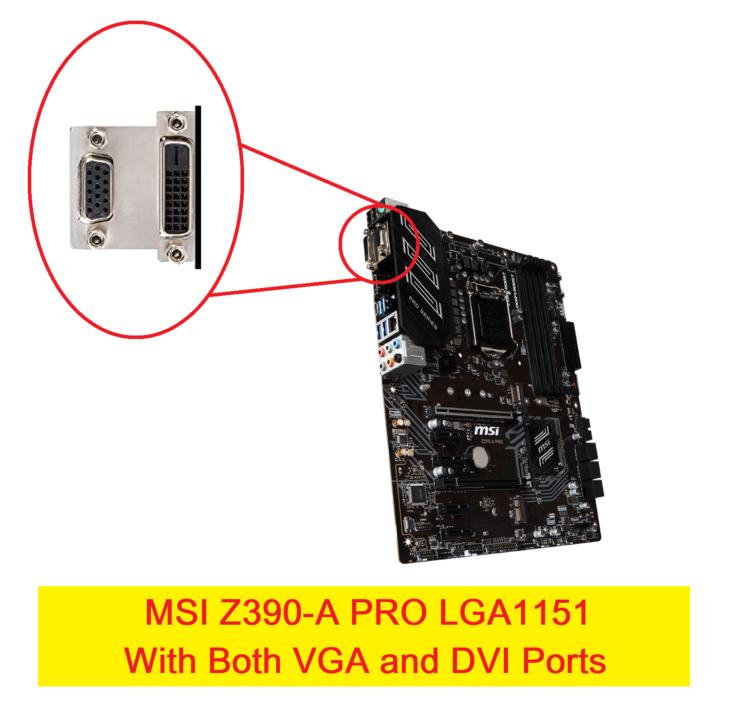 Why Do Motherboards Still Have VGA ports?

It’s because they provide a wide range of compatibility with different types of displays. While HDMI and DVI are becoming more popular, VGA is still used as a standard in older computers. Many people also have multiple monitors that use different types of connections, so having a VGA port is a plus.

Additionally, some graphics cards still come with VGA outputs, so having a port on the motherboard gives users more options for connecting multiple display devices. VGA ports are inexpensive to produce. That’s why manufacturers try to include it instead of expensive display ports like HDMI.

Is VGA or DVI better for gaming?

DVI is considered best for gaming. DVI connections can carry a sharper and more detailed image than VGA, so they are often used for high-end displays. In addition, almost all the latest graphics cards support DVI and HDMI because both are ideal for gaming monitors.

DVI is faster than the VGA displays; DVI has higher latency than VGA, which means a minor delay between inputting a command and when it appears on the screen. It can be vital in fast-paced games where every millisecond counts.

First, check to ensure that the cables are correctly plugged in, and connections are tight. More than 90% of issues are related to VGA or DVI cable connection than the ports. So try to change the cable in the first place. If you are still facing the issue, then you have to check the ports.

Locate the VGA or DVI ports at the I/O panel on the back of your computer system. Look for any cracks or large dust particles. If your port has any physical damage, you have no option other than replacing it or buying converters. Converts like USB to VGA or DVI are the best option in this case.

If you have found the dust particles, you must clean the ports thoroughly. You can use the compressed air duster to clean the ports. Dust can act as an insulator, preventing current from flowing through the port. It’s recommended to clean your PC once a week to prevent such issues.

The third option is to look for the drivers. If your display drivers are not installed or up to date, you will have this issue. If you don’t know how to update the drivers, here’s a short guide for you: 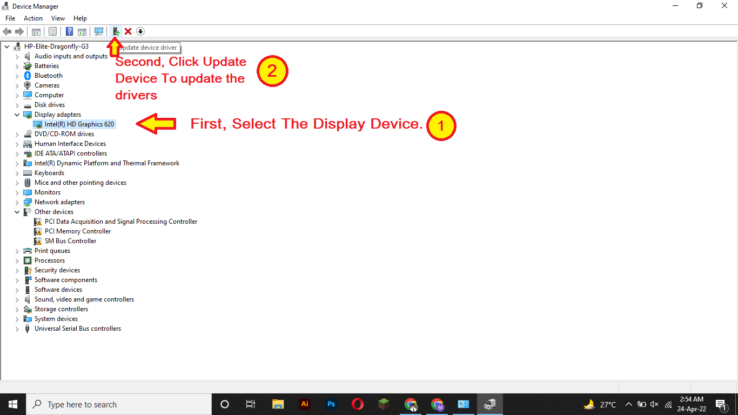 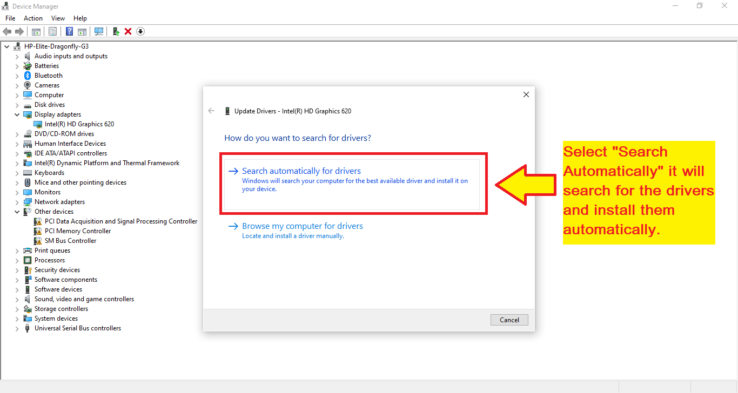 If you are still facing the problem, I suggest buying a converter. There are several converter types like DVI to VGA, USB to DVI or VGA, HDMI to VGA, HDMI to DVI, and many more. It would be best to consider them instead of replacing your motherboard’s display port.

(Images of DVI to VGA, USB to DVI or VGA, HDMI to VGA)

What Is The Difference Between DVI And VGA?

Digital Visual Interface (DVI) is the standard interface for connecting computers and displays. It’s an update to the older Analog Video Interface (VGA). The main difference between DVI and VGA is that DVI supports digital signals while VGA only supports analog signals.

The DVI connector consists of a plug with 29 pins arranged in three rows. DVI can carry a digital video signal from a PC to a display without requiring an analog conversion. It results in a sharper, clearer picture than the analog Video Graphics Array (VGA) standard.

There are two types of DVI connectors: DVI-I and DVI-D. DVI-I connectors can carry either digital or analog signals, while DVI-D connectors are digital-only. Most new PCs and displays include DVI-I connectors, which provide the greatest flexibility.

VGA is still commonly used, especially for older devices. Many graphics cards and motherboards still include a VGA port. VGA has 15 pins in three rows. It’s a DE-15 connector and is also known as an RGB connector. VGA carries synchronizing information on separate lines and analog signals.

It was the last analog video standard introduced before digital video became commonplace. VGA is still used today, but its analog video signals are being replaced by digital DVI or HDMI signals.

Pros And Cones Of Using DVI And VGA:

There are some advantages and disadvantages to having DVI and VGA ports available on a modern motherboard. We will discuss both pros and cones in the list below:

Pros And Cones Of Using DVI:

DVI is more advanced than VGA. It dominated the computer industry for about 15 years. DVI was considered an essential part of motherboards and graphics cards. It’s undoubtedly still in use but has been dominated by high-speed ports like HDMI. Here are some of its pros and cons:

Pros And Cones Of Using VGA:

VGA is one of the oldest display ports in the computer. From 1987 to 1999, it was considered the high-speed display port. But it was dominated by DVI in the late 90s. Here are some of its pros and cons:

Even though DVI and VGA are old technologies, they are still used in many devices. If you have a device that only supports one of these standards, you can use a converter to connect it to a modern computer or display. There are several types of converter available, so be sure to choose the right one for your needs. Thanks for reading! I hope this article was helpful. If you like it, feel free to share!